Will the FED ever Taper? And the Contagion Risk from China’s Property Developers

As the market awaited the release of the US payroll report to see if it would indicate when the Federal Reserve would begin to ‘taper' its monthly $120 billion of quantitative easing, a set of unexpectedly weak data pushed back all expectations.

The immediate reaction was disappointment, as only 235k jobs were created versus an expectation of 733k (and 1,043k the previous month).

With inflation running above expectations, central bank chair Jeremy Powell has made job growth a key factor in board policy. However, there is plenty of evidence to suggest that the job market's weakness is only temporary.

Surprisingly, there are currently more job openings in the United States than people looking for work. In fact, there are 10.07 million job openings right now, which is the highest number ever.

Because of low mobility, school closures, delta fears, and the security of employment benefits, the payroll number was low.

The total number of job openings by industry on JOLTS is at an all-time high (Source: Bloomberg)
For two reasons, we can anticipate a rebound in employment data in the future.

To begin with, on September 6th, 7.5 million Americans lost their $300 weekly benefits, forcing many to return to work.

Second, poor payroll data has been linked to COVID-19 outbreaks, and as the delta variant fades, we should see an increase in hiring. 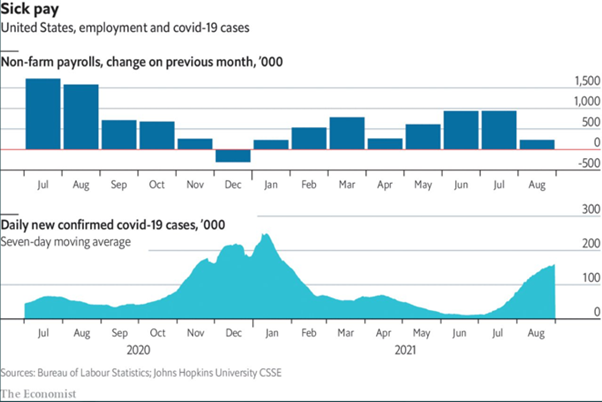 Worries about inflation are being exacerbated by the sharp increase in wages.

The surprising increase in average hourly earnings (+0.6 percent MoM versus 0.3 percent MoM expectation) in the payroll data may be more concerning to the Federal Reserve than the headline number.

Worries about inflation are being exacerbated by the sharp increase in wages. Employers are being forced to raise wages to stay competitive and attract new employees because there are over 10 million job openings.

Despite weak job growth, Federal Reserve member James Bullard called for a quick "taper," saying there is "plenty of demand for workers."

There will always be conflicting economic signals in the eyes of the Federal Reserve.

There will never be a good time to end quantitative easing.

The persistence of higher-than-expected inflation data will almost certainly be the deciding factor in their decision. 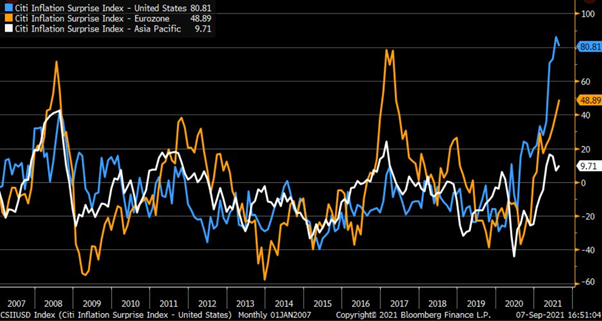 The Citibank inflation surprise indices for the United States, the Eurozone, and Asia Pacific does not appear to be transitory (Source: Bloomberg)

We are seeing continued supply chain and logistics issues across industries due to COVID-19, Brexit (still!) and Hurricane Ida.

Electric cars require up to 3000 microchips, and car companies expect the chip shortage to last until 2023. Increasing the upward pressure on prices around the world. 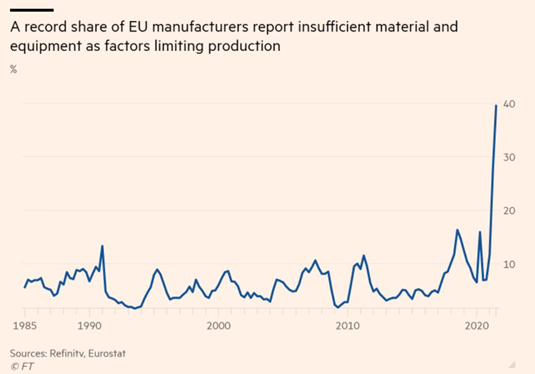 Breakdowns in the supply chain have been reported by EU manufacturers. (Refinitiv, Eurostat, and the Financial Times)

The property market in China is in a state of flux

We are now seeing a further deterioration in the economic data, with the Chinese credit impulse continuing to fall and government crackdowns on property, technology, and education.

The China services PMI index has reverted to contraction, and the non-manufacturing PMI has posted its second-worst reading ever. 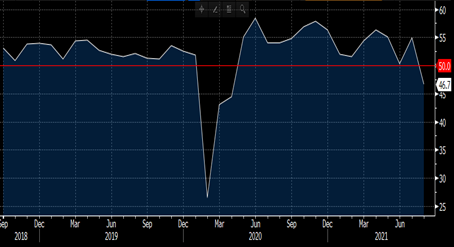 Caixin China Services PMI index back in contraction (Source: Bloomberg)
What's more worrying in China is what's going on with the heavily indebted property developers. With $ 15-16 billion in offshore debt and over $300 billion in total liabilities, Evergrande is the world's largest and most indebted real estate developer.

On Shenzhen's exchange, its domestic bonds are no longer accepted as collateral, and it announced today (8 September) that it will suspend interest payments due on loans to two banks on September 21st.

Even its credit rating has been downgraded twice in the last 24 hours, with Fitch stating, “A default of some kind appears probable.” 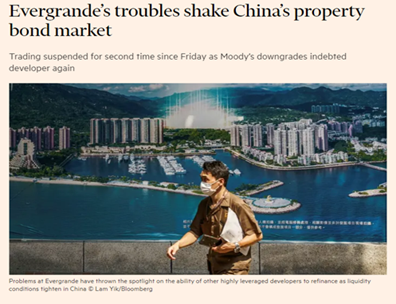 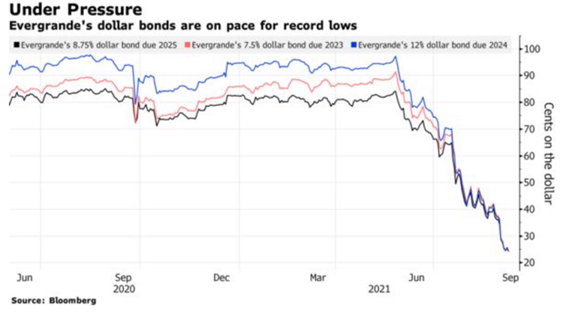 Evergrande bonds continue to fall (Source: Bloomberg)
Where this becomes concerning is the risk of contagion. If the stress spreads from property developers to banks, it will be a disaster. Interbank lending begins to falter when concerns shift from direct exposure to counterparty exposure.

By lowering the RRR and injecting liquidity into the system, the PBOC can take immediate, direct action to give banks more flexibility.

However, following the PBOC's Three Red Lines crackdown on property developers, we'd expect a start-stop policy of interim support rather than a full RRR cut and liquidity injections into the system.

The S&P 500 index is a key chart of the week. After rallying 106 percent from its March 2020 lows, the stock is now coiled tightly in a rising wedge pattern.

This is a classic reversal pattern, but only when the support line is broken; it is still trending higher until then.

When the support line is broken, however, S&P bulls will sell to liquidate their long positions, while S&P bears will sell to initiate new short positions.

If there is a break, the market will most likely move quickly lower to 4068, the 200-day moving average, where brave dip buyers will emerge.

S&P rising wedge pattern. A strong uptrend until the support line is broken. Then expect a spike in volatility and risk off across asset markets. (Source: Bloomberg)
Finally, let's return to crypto currencies, which saw a sharp selloff on September 7th, with Ethereum falling by 25% at one point.

A 5% drop in the US dollar earlier this year was hailed as the "death of the dollar," while a 25% drop in crypto in a matter of hours was referred to as "a healthy correction" by crypto hodlers.

I like Ethereum a lot, but I don't like how volatile it is. Volatility decimates trading accounts in a market rife with leverage (up to 125x on some offshore exchanges). Be careful out there!